Knowing a little math can make your gym time more effective and get you better results.

Muscles can’t do math. Knowing a little math can make your time in the gym more effective and get you better results. I was never good at math, and I’ve been lucky to know some pretty smart gym rats. One was my workout partner in 1985 and ’86 at Nelson’s in Jacksonville (RIP Jim Nelson) who had worked for NASA. Rick was a math whiz. One day in the gym while working on the leg press sled with 450 lbs loaded, Rick casually says, “You know you’re only pushing 315 lbs., right?”

Simultaneous buzz kill and birth of an interest in what I was actually lifting in the gym. The weight felt pretty heavy, although it was unusual that I could do quite a few more reps with the leg sled than 450 on a bar. I’d previously chalked that up to squats just being hard. But clearly, I wasn’t overloading my legs nearly as much as I thought I had been.

If we all agree that overload is essential for building that attractive muscle gym-goers seek, then it pays to understand load in general. Without knowing actual load, it’s pretty hard to drill down on overload, and understand how levers and direction of pull influence the resistance we’re moving.

The human body moves by muscles acting on joints. There’s some neurological stuff that’s necessary for sure; but for now, let’s assume that’s all in order so we can focus on muscles and joints.

Isolating a single joint is difficult business. Our bodies are designed to get work done efficiently, so the more body parts that chip in, the more efficient the work. Our brains want the work to be as easy as possible, so it takes mental and physical effort to isolate a body part. Before that can happen, we need an understanding of the construction and jobs each “lever”. Isolation requires concentration.

A lever is composed of a fulcrum, a weight (or load), an “arm”, and effort. There are three classes of levers. You guessed it: Class I, Class II and Class III. There are some really good web resources out there that will do a better job than me at getting deep into levers, but for sake of summary.

The fulcrum lies along the arm somewhere between the load and the effort. Think see-saw.

The effort and weight (load) are to one side of the fulcrum in this order: fulcrum, load, effort. Think wheelbarrow.

Effort and weight switch positions: fulcrum, effort load. Think biceps curl. The elbow is the fulcrum, the biceps and forearm muscles lie between the elbow and the weight. Same as the side lateral, which we will discuss in a little detail here.

Understanding the body’s levers is a fun way to analyze exercise form and make your gym time more efficient. The more joints involved in a given exercise, the more levers, and the load gets spread out between them.

The math of leverage says is that the farther away the weight is from the fulcrum, the more the force required to lift it. Putting a weight at arm’s length is going to be a lot harder to lift–about twice as hard–as if you put that same load at the elbow, or if you bend the elbow. That’s why you see people in the gym doing side laterals with arms completely bent, with 40 lb dumbbells at their armpits for sets of 20, flapping their arms like they’re doing the funky chicken, and the big dude with cannonball delts using 15s with arms straight and fully extended barely making it to 12. The math goes something like this:

Add another lever, the joints share the resistance.  Take the side lateral for example.

Most agree wasted effort is a bad thing. For bodybuilder types (even if they don’t call themselves that), a poorly-executed exercise is a complete waste of time. And not many supposedly isolation exercises are as butchered as the side lateral.

The side lateral as an isolation exercise is intended to work the deltoids, and the middle deltoids at that. Done for isolation, the only thing that should move is the arm. The straighter the arm, the more the overload-per-weight-lifted. The side lateral makes the mechanism a Class 3 lever.The fulcrum, effort and resistance occur in that order, and the resistance is opposite the effort.

When only the arm moves in a side lateral, the delts are doing the work past ~15 degrees. It’s their job to abduct the humerus1. The supraspinatus–one of the unseen shoulder muscles, gets things started. If anything else moves, it’s not just the delts doing the work. 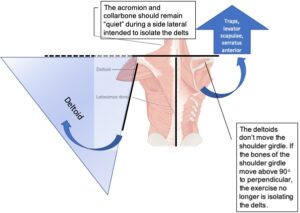 Isolated and Compound side lateral anatomy

If the shoulder blade moves, the traps, levator scapulae, and serratus anterior are getting in on the action. This is perfectly fine as long as that’s what’s intended. In fact, EMG (electromyography) studies have shown that traps can get a nice overload2 from a side lateral due to the longer lever arm. (I like doing side laterals this way occasionally to get the traps some action as an alternative to other trap exercises). Not allowing the weight to return all the way back to the side of the body adds intensity…as do one-and-a-half reps: pull the weight all the way up, go halfway down, then raise back to the top before completing the rep back to the side.

When more than one joint gets in on the action, things get a little more complicated.

This is a pretty simple concept yet ignored all the time in practice. Muscles work against resistance and the more directly the muscles oppose the direction of the resistance, the better.

Take our side lateral example above. When using a dumbbell and either seated or standing, resistance is downward because that’s the direction of gravity. (If you lie on your side, gravity is still down, but the deltoid changes its orientation to it.) Use a cable machine and position the pulley off to the side, the direction of pull is sideways. The deltoid is under tension longer when the resistance is off to the side (thanks Doug Brignole).

When selecting an exercise, knowing where resistance is makes a big difference.

Knowing your lifting math will make your gym-time more efficient and more fun. Be careful how you share you new knowledge. Not everyone wants to hear they’ve only been lifting 70% of what they think they have.

All for now. Remember that knowing a little math can make your time in the gym more effective and get you better results. Watch for more on muscle math.