Sissy squats are not for sissies

Still getting used to this stay-at-home thing.  I must admit I miss the gym.  The  people sitting on equipment checking their phones between sets.  Different matter.  My stay-at-home office is about 10 steps away from my at-home gym:  bedroom to patio.  And if it’s rainy outside, then it’s fewer steps than that.  All I have to do is get off the computer, walk to the closet, pull out the hotel laundry bag that holds the suitcase gym, and start.  I don’t even have to put on my Lulus.  No one’s watching.  Which is great when experimenting.  (My neighbors aren’t looking out between the blinds, are they?)  In today’s experiment, I remind myself that sissy squats are not for sissies.

I started doing sissy squats during the weeks leading up to lower back surgery.  I was looking for ways to work my legs without stressing my lower back…at all.  Later I read  Doug Brignole’s “The Physics of Fitness” where he discusses using sissy squats and their cable machine, and they’ve been part of my routine since.  For years, I’d listened to the folks who said sissy squats were good for nothing but blowing out the knees.  But Doug made sense, so I tried them again, but this time with better form.  Wow.  (Note to self:  if Doug says something about anything related to biomechanics in exercise, listen.)  Since I have no cable machine available, time to experiment with materials I have handy.  Goal here is an approximation of the exercise described in Brignole’s text book.  I’m using what I’ve got in the suitcase gym…tubing, and bodyweight. 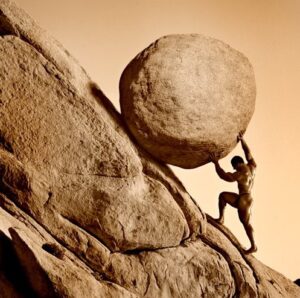 Some background on the sissy squat

One story goes that sissy squats are named in honor of Sisyphus, a bad actor from Greek mythology who was constantly misbehaving and finally sentenced by the gods for all eternity to push a large rock up a hill only to have it roll back down again.  A bodybuilder would automatically conclude that this would have been a killer leg exercise, and so therefore would have left Sisyphus with Platz-like thighs, de facto evidence that sissy squats are not for sissies.

Vince Gironda, the great bodybuilder and trainer from the silver age of bodybuilding. Vince was a big fan of the deceptively easy-looking exercise and said, “the sissy squat will make a sissy out of you”.

Experimenting with the Sissy

Experimentation starts with hypotheses.  Here are mine for workout 3:  could a sissy squat with resistance tubing approximate the effect of cable machine tubing?  What would happen if I just used the tubing to maintain balance, instead of pulling against it, as with cabling?  And what if I just went for old-fashioned bodyweight sissy squats?  How would those compare.  So I put them all to the test.

Secure tubing through door anchor about 5″ above threshold.  Hold tubes, and back away until the tubing became taught but not stretched.  Standing on balls of feet, bend knees retaining rigid thighs, hips and torso.  Lean back as far as possible without allowing tubing to stretch.

For bodyweight variation, set up the ladder so that would move if I tried to pull against it.  Used only for balance.  Let go completely as much as possible. 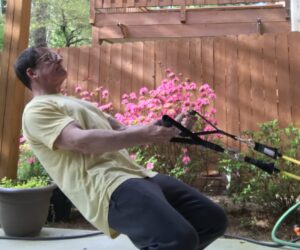 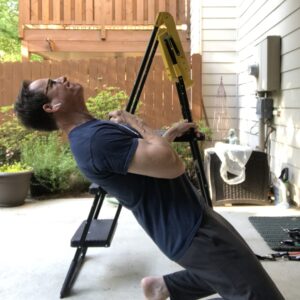 Those were all freaking INCREDIBLE, and I’m keeping them in my routine after the gym re-opens.  Based on feel and the number of reps I could perform with the set-up, the lighter tubing was roughly as difficult as bodyweight only.  To be completely fair, the cable sissy is designed to pull “backwards” against the cable where the resistance is out in front instead of downward.  (Think leg extension).

Holding the elastic resistance tubing provided tactile feedback on how much I was depending on the support.  If my legs weren’t providing the support, my arms automatically pulled on the tubing for support.  The less the tubes stretched, the more weight I was actually moving, since the tubes weren’t compensating for gravity as much.  They were roughly as difficult and effective as the old-fashioned bodyweight version.

Why are sissy squats so difficult?  Three reasons: 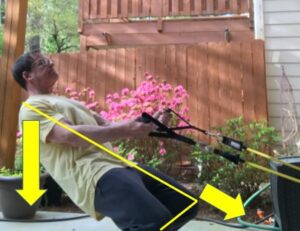 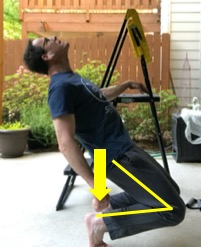 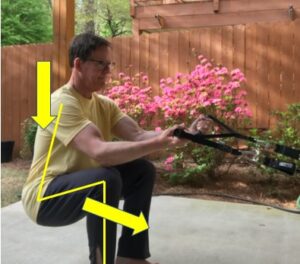 Biomechanics explains why these tax the legs as directly and intensely as they do and it has to do with direction of resistance and levers.  You can load up a barbell with a bunch of weight and not hit the quads as much.  But the calculus supports it.   There’s also this neuromuscular phenomenon called reciprocal innervation, which is a fancy way to describe the way the body prevents opposing muscles from overloading and hurting ourselves, or just plain not functioning properly.  By taking the glutes and lower back out of the equation with sissy squats, the quads actually operate more efficiently because they’re not trying to act in concert with the aforementioned muscles.  So sissy squats are “all quads all the time” and therefore a great isolating exercise.  (I’m not saying don’t do traditional squats BTW.) 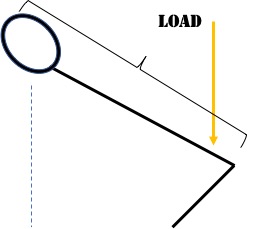 Single body lever carries entire load. The farther back you lean, the longer the lever arm. 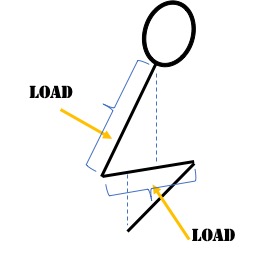 Load divided between quads, glutes and lower back

Here’s the whole workout where I inserted the sissy squats, which are already part of my list of patio workout exercises.  In this workout, I followed a set of 10-12 sissies with a set of 10-12 regular vertical squats–using as little support as possible–for a quad-smoking superset.  Workout 3 contained only five exercises so it was shorter than most but packed a punch.

Sissy squats are not for sissies, and definitely work my quads harder than traditional squats and without the stress on my beat-up lumbar spine.  Tubing was more challenging than cables because it was less stable at the bottom of the movement.  Next step is to progress to unsupported, then when the gym re-opens, weighted, and then weighted unsupported.

So, in summary, I learned something, thanks to an unfortunate world situation.  Crappy trade-off, but gimme a break…trying to make lemonade here.